Home › In the Scene › On the Stack: Upsets in Legacy

So, if you’ve been staying up with Legacy, today was day 2 of the Legacy GP in Birmingham! And we had a major upset seeing Gary Campbell (The Godfather of Scottish Magic (it was stressed a lot during the stream)) on Dragon Stompy goes 2-0 in the finals against Grzegorz Kowalski on Grixis Delver! Results, standings, and lists can be found on the Wizards website here.

If you’ve ever played Grixis Delver, these Stompy decks can be challenging matchups, and Dragon Stompy playing 8 Blood Moon effects can be huge.

Top 8 of the GP had 3 Grixis Delver decks, 1 Steel Stompy, 1 Czech Pile, 1 Kess Pile, 1 Dragon Stompy, and 1 (wait for it…) Dredge! I’m a little saddened that it wasn’t Manaless Dredge, but I think that Dredge really is the better of the two lists right now. Making top 8 in a GP with Dredge I have to say takes a crazy amount of skill and luck. Graveyard strategies have been hated out for a very long time, but looking at this, and how well Reanimator is doing online, it might be time to dust off your Grafdigger’s Cages, cause the graveyard strats are coming back!

Stompy Strategies have been around for a very long time, Dragon Stompy being the most popular lately. We’ve seen a decrease in Eldrazi Stompy (some players shifting to Big Eldrazi), and an increase in Steel Stompy (AKA: Legacy Shops). We’ve been seeing Stompy decks making comebacks and being pretty consistent in making top 8 in not only the latest GP, but also in the Card Kingdom Legacy Preservation Series.

We saw Steel Stompy pop up late last year, and it revealed itself by top 8ing events in Europe as well as Seattle. Back then we weren’t sure if it was real, but it’s been proving itself for some time now. When we first see it, it looked like Affinity, a strategy commonly found in Modern, but playing against it multiple times, it’s definitely different. Steel Stompy is closer to it’s Vintage Uncle Shops (one of the early names for Steel Stompy was Legacy Shops).

A: I’ve only played against Steel Stompy and Affinity, and have never piloted it myself, but they are very different decks. Affinity plays 0 drops like Ornithopter and tries to flood the board with artifacts to get heavy hits in with Cranial Plating and Master of Etherium

Steel Stompy, on the other hand, doesn’t even play Cranial Plating. Instead, it plays Steel Overseer (which Affinity has also picked up), Walking Ballista, Arcbound Ravager (also played by Affinity), and Hangerback Walker. The key thing is that Affinity is a little all in. Steel Stompy, on the other hand, has a lot more lines and flexibility to it in the way it can use Steel Overseer and Walking Ballista together.

A new card that just came out has been showing off in these stompy lists! Karn, Scion of Urza, has made its way into Legacy! Stompy Decks (as well as a few other non-blue decks…), don’t have card draw, but new Karn changes that! Even if your opponent doesn’t give you the card you want, you’ve still gotten deeper into your library, and the next turn you can just -1 Karn to put any card with a silver counter into your hand!

Seal of Fire… In Burn? 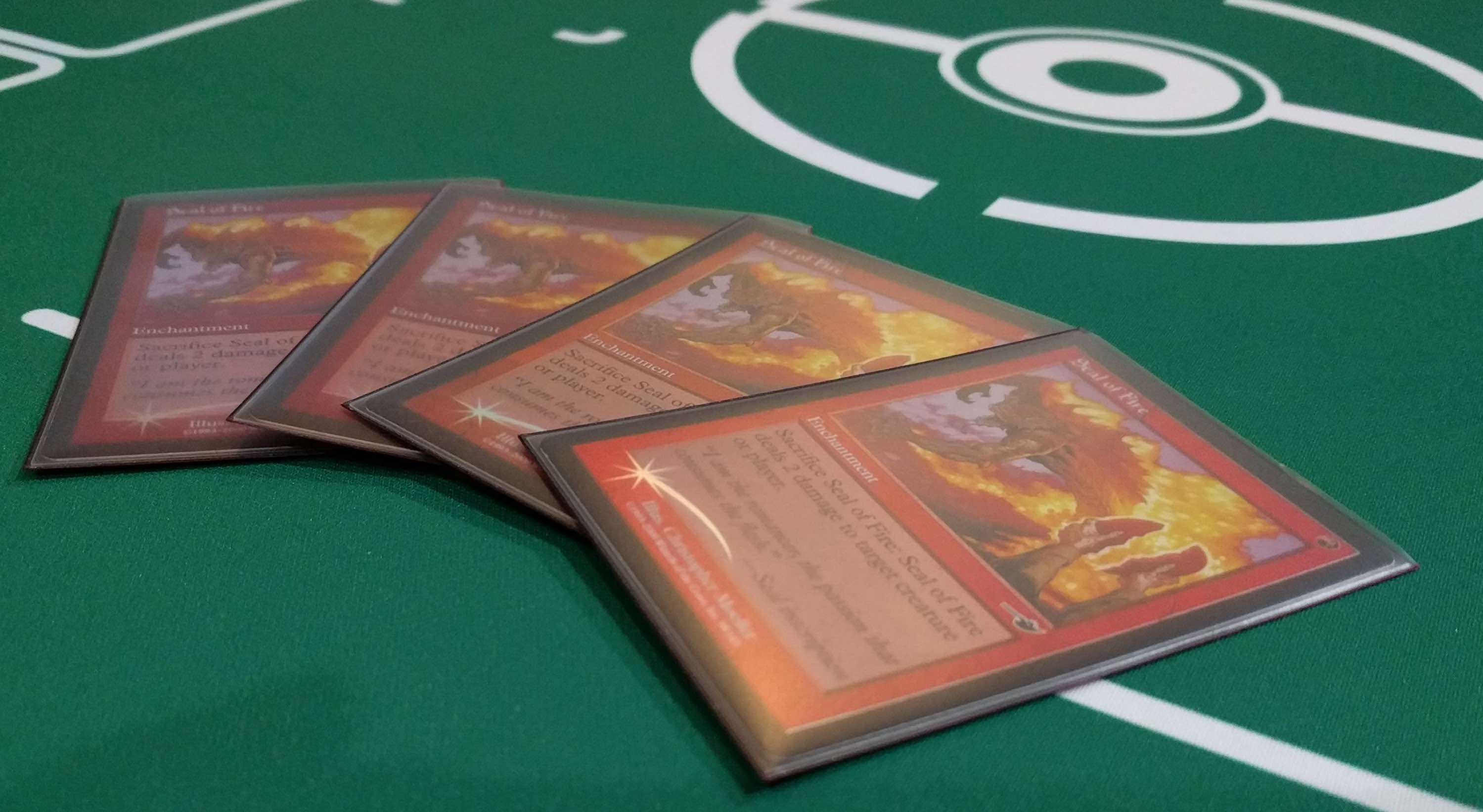 In an interesting post on reddit, user Yasui_Yasai goes over some shortcomings of Burn and recommends players trying out Seal of Fire. Lava Spike is considered the worst Lightning Bolt in the deck, it’s also recommended as one of the first cards to be sided out on the play when piloting Burn. Seal of Fire is being recommended in the post, as a card similar to Rift Bolt, but with more control since you get to decide when to crack it. To some it appears to be just a Shock, but the flexibility of Seal of Fire and its presence being known forces opponents to figure out how to sequence around it, especially since it’s difficult to counter without a card like Stifle once it’s hit the battlefield. It kills Deathrite Shaman, Delver of Secrets, Mother of Runes, Thalia, Guardian of Thraben, etc.

Q: Why do you have a playset of foil Seal of Fire trying it out?

A: I’m not convinced for Legacy. But in Pauper, it’s really good against Inside Out combo. Also… I like collecting cards that I played in my childhood Burn deck (I have a set of Lunge that I plan on playing in the next Pauper Rags to Riches).

Buyouts have been going on like crazy lately with people even posting fake tournament reports trying to increase the price of Meditate which is a reserved list card that doesn’t see any play.

It’s not just Legacy and Old School cards being bought out, but even foil Modern staples such as Stone Rain 7th Edition going up to “$60” and Mercadian Masques up to “$40” (NM recently selling on ebay for $14). Sadly, I don’t think people are actually buying them at those prices. Judge Lightning Bolts were also bought out and folks are trying to sell them for $700+ (LP recently sold on ebay for $400).

View all posts by scaryrawr